Each player draws seven dominoes and places them so that the other players can’t see their value.

The player holding the double-six begins the first game and places the double six domino in the middle of the table.  In subsequent games the winner of the previous game plays first and may choose to play any tile in their hand.

Each player must in turn then play a tile onto the table which matches one of the numbers on the tile(s) already played.  The domino is positioned so that it touches either end of the domino chain which thus gradually increases in length.  For any turn, there are only two options to play on. 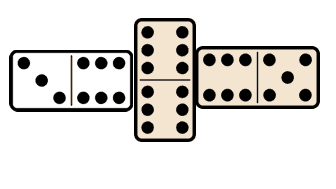 If a player can lay a domino, that player MUST play.  They may not pass. If the player cannot play, he/she “knocks”, or taps the table, and play passes to the next player.

(The opposing players should make mental note of the numbers opponents cannot play on and attempt to block them by playing the same numbers on a later turn.)

The game ends when one player “chips out” (plays his last domino). The other three players count the spots on their remaining dominoes to determine second, third and fourth place. Third place player rotates to the table to their left.

If the game reaches the point at which no player can proceed, the winner is the person with the least amount of spots on their remaining dominoes.

For the sake of time, NOVA will impose a 5 minute time limit for each game.  If the game does not naturally end by that point, then the player with the least amount of points on their remaining dominoes wins.

Each tournament will be five games (5 minutes each, tournament approx. 25 minutes).