Report back from Haiti- part one 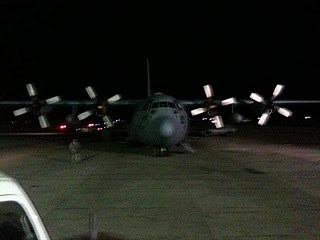 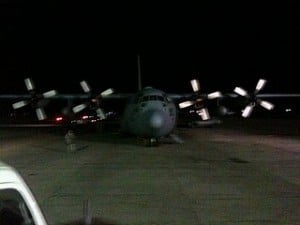 The following posts will be coming in segments. They are the eye-witness reports of Dr. Charles Kordula, President of NOVA Hope for Haiti, who led the first team of volunteers who traveled to Port au Prince in the early days of the relief effort. The posts reflect the situation as it unfolded as seen from on the ground. Some of the situations recounted have, thankfully, since changed, others remain the same or getting worse. I am posting them as he has given them to me to capture the experience of being in Port-au-Prince as this tragedy unfolds: 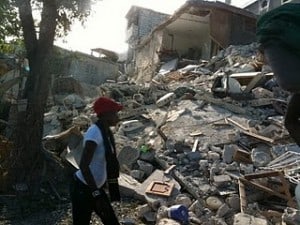 The Magnitude of the disaster: Port-au-Prince
The town of 2 million poor inhabitants appears to have been bombed out. Buildings are collapsed everywhere, from the center of town down by the port and continuing right on up the slopes of the encircling mountains, where poor illegal shantytowns (Bidonvilles) have been constructed, packed together helter- skelter without plan or sanitary drainage. Wealthy and poor alike have fallen victim to the decimation and both large and luxurious houses as well as poor concrete block shelters lie in rubble. Many buildings remain standing but structurally unsafe, and others have been reduced to a pile of dust and twisted rebar. 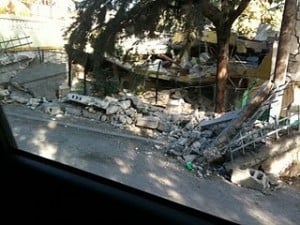 There were paltry services in the Capital before the earthquake. Now there are virtually none: no water, no electricity, and no public communication. Food supplies from the provinces have been virtually cut off by road and bridge destruction, the port is non functional. A military transport corridor was in the process of being set up between Santo Domingo in the Dominican Republic and Port-au-Prince, but at the time of this report nothing had yet been moved in. At night, the city is reminiscent of a “ghost city” seen in the Wild West movies when a town had been abandoned: not a soul is seen on the dark and destroyed streets, not a vehicle or even a dog, not a ray of light. This is ever more evident when flying over Port-au-Prince, the only light among two million people is that of small fires. The temperatures are scorching hot during the daytime, up in the high ninety-degree Fahrenheit range, and at night the temperatures drop so low that four layers of clothing are required to avoid shivering.

All gainful employment has come to an abrupt halt in this country of normally 80% unemployed. The national infrastructure was so weak to start with that virtually ALL aid is coming from outside and the Haitian government is providing virtually nothing. The national police headquarters in Delmas, a busy section of PAP, collapsed totally with over one hundred police fatalities in one sudden blow. The national prison cracked open during the earthquake and 3,000 hardened criminals escaped to wreak havoc in what is left of this city. Vandalism had not yet started at the time of this report but during a walk between the airport and the UN Garrison on the Airport Road, large unwieldy swaying crowds clamoring for food, water and a source of income made the street impassable to vehicular traffic. Heavily armed United Nations (MINUSTAH) forces and National Haitian Police were doing what they could to contain the crowd. 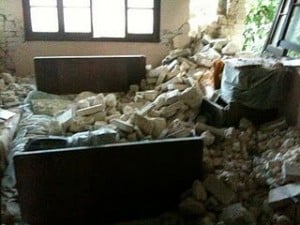 The Provinces
I did not travel outside of the Capital, but met acquaintances from southwest Haiti who recounted the earthquake’s damage. There is currently a massive exodus of Port-au-Prince residents returning to their towns and hamlets of origin. Most of the movement is on foot. Tent cities are being erected where there is open land. The town of Leogane was 90% destroyed and Jacmel sustained 50% destruction including the Departmental Hospital. Bridges have collapsed making it necessary to ford riverbeds. Fortunately it remains dry season and rains are light and infrequent. In February and March this will change. A large crevice opened in the only southern highway connecting Les Cayes with Port-au-Prince and consequently overland transportation between the capital and the southwest has ceased. There has been some scattered damage in Les Cayes and Jérémie but nothing of the magnitude in Port-au-Prince.

Your ticket for the: Report back from Haiti- part one

Report back from Haiti- part one